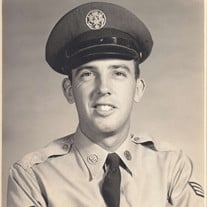 Roy C. Lower, 89, of Brownwood passed away on Wednesday, July 1, 2020. A private graveside memorial service will be held by family in Junction, Texas. A celebration of life will be held at a future date. Roy C. Lower was born on September 21, 1930, in Boise, Idaho, the son of Burl E. Lower, a partner in a tire and automotive repair business, and Myrtle Amelia Turner Lower. The Great Depression had the economy, including the family business in Boise, on the ropes, fortunately for Roy's family, an uncle near Wichita Falls, Texas, had an oilfield equipment business which was fairly "depression-proof," and he asked Burl and other brothers to join the business. In Late 1932, the family drove to Texas, where they moved into a one-room house on the premises of the Wichita Gas Engine Works. In 1933 the household grew by one, when another son, Milton, was born. The family would remain in the "Little Yellow House" and in a larger house nearby, until they moved into the city in 1939. Roy completed public school in Wichita Falls, graduating from high school in 1947. A year later registration for the military draft resumed, and by 1949 the Korean War loomed. One day Roy and a friend went down and enlisted in the US Air Force. The highlight of Roy's Air Force career was a year spent on the tiny island of Kwajalein, where his automotive mechanic's skills were put to work as the sergeant in charge of the motor pool. The Air Force contingent on the island was actually "on loan" to the Navy Seabees. The mission was to prepare the island for demolition in a nuclear bomb test. During this year, Roy Lower, a lifelong Methodist, made a career decision: He wanted to go into religious education. When he left active duty in the service, he enrolled at Midwestern University in Wichita Falls to pursue this line of study There he met and married his first wife, Cleva Tiner, with whom he eventually had two sons and a daughter. The next year Roy transferred to McMurry University in Abilene, a Methodist school, where he completed his degree in religious education. On graduation he began teaching in the Abilene high school, where he taught what is commonly called "shop," which included automotive repair. Roy moved again when San Angelo high school offered to build him a first-class auto mechanics facility if he would come there to teach courses focused on this specialty. Roy retired from that school system, ending a 28-year teaching career. Generations of Roy's students became working mechanics, some having been selected in statewide competitions as top student in automotive mechanics in Texas. Roy remarried in 2002, after the passing of his first wife Cleva to cancer in 1998. He married Sally Anne Smith of Junction, Texas. Roy and Sally spent many years traveling, working on genealogy, and spending time with family and friends. They enjoyed riding around on the quiet roads of Junction and Menard, singing along with the Gaithers, while looking for garage sales. Sally Anne passed from cancer in 2018. Roy was a man of unbreakable faith and generosity. His family remembers his immense patience, intricate storytelling, deep and hardy laugh and "MacGyver" skill for fixing mechanical malfunctions. Many of the amazing caregivers in our community knew him as the "train man," as he loved to impress with his detailed train layouts. Roy was a God-fearing man who will live on in the hearts of those who loved him dearly. He will be greatly missed. Roy was preceded in death by his parents, Burl and Myrtle Lower; his first wife Cleva Tiner Lower; his second wife Sally Anne Smith Lower; and his daughter Christy Lower Newman. Roy is survived by daughter, Jennifer Martinez and husband Joel; son, Joey Smith and wife Ginger; brother, Milton Lower and wife Kathleen; three grandchildren, Haley Rayha and Husband John, Drew Martinez and Michelle Newman, as well as other extended family. Condolences, tributes and memorials can be shared with the family on www.heartladfuneralhome.net

Roy C. Lower, 89, of Brownwood passed away on Wednesday, July 1, 2020. A private graveside memorial service will be held by family in Junction, Texas. A celebration of life will be held at a future date. Roy C. Lower was born on September... View Obituary & Service Information

The family of Roy Claude Lower created this Life Tributes page to make it easy to share your memories.

Roy C. Lower, 89, of Brownwood passed away on Wednesday, July...

Send flowers to the Lower family.