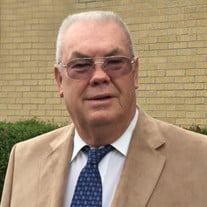 Royce Ford, 77, of Bangs, Texas passed away Friday, November 27th, 2020 at St. David’s Medical Center in Georgetown, TX. Visitation will be 6-8 pm on Tuesday, December 1st at Heartland Funeral Home in Early, TX. Services will be held at the 4th and Stewart Church of Christ followed by burial at the Trickham Cemetery in Trickham, TX. Service will be Livestream on Facebook at: 4th and Stewart Church of Christ. Born in Santa Anna, TX, the son of Clarence and Billie (Strange) Ford, he was a resident of Brookesmith, TX. After graduating from Brookesmith High School in 1962, he enlisted in the United States Navy for a brief time before enlisting in the United States Air Force, where he served 4 years. During his time in the Air Force, he was in California, Germany, and Spain. After serving in the Air Force, Royce moved to Austin and worked for an air conditioning company. In Austin, he met the love of his life, Susan Nietfeldt, and they were married October 23, 1970. They recently celebrated their 50th wedding anniversary. In 1972, they moved to Bangs and Royce joined Roberts and Petty doing air conditioning in Brownwood. He worked there for 25 years. He then worked at the Texas Youth Commission in maintenance. After retiring from TYC, he worked at Loadcraft Industries in Brady. Royce grew up on a farm and always had animals. His cattle and his farm were his joy after retiring. Royce and Susan raised Blonde D’Aquitaine cattle. He leaves his wife of 50 years, Susan; his daughter, Melissa Ford; his sister, Gaynell Williams and her husband Leland; many nieces and nephews; several cousins; and many good friends. He was preceded in death by his parents and his grandparents; Audie and Dacie Ford and Olin and Jewel Strange.

The family of Royce Ford created this Life Tributes page to make it easy to share your memories.

Send flowers to the Ford family.