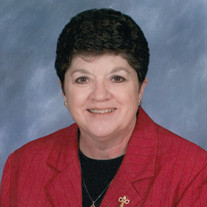 Nana - Mother - Wife all describe the wonderful woman, Ruth Schwartz that we lost from this earth to be with her one and only love, Larry Schwartz. She passed peacefully in her sleep on Friday, February 26th at home. Ruth Annette Adeline Striepe Schwartz was born on March 20, 1947 to John G. and Ruby A. Striepe. She was blessed to live in a couple places being the daughter of a Lutheran Pastor. She was born in Cameron, TX while they resided in Buckholts, TX. Most of her education was in the small German community of Priddy, TX. She graduated from Priddy High School in 1965. While in school, she played basketball with her friends as well as other school activities. She married her love, Larry Schwartz on May 31, 1967 at Johnsonville Township, Minnesota. They enjoyed 51 years together and were blessed with two daughters, Shelly A. Jasek of Waco and Shannon L. Adams of Early. Ruth attended college at Texas State University and Howard Payne University. She worked at West Texas Printing and First Christian Church as Secretary and then for the USDA Rural Development office for 34 years helping many in the community in purchasing their first home. She was the "help" for Larry in farming their place in Early and his home place at Priddy. Ruth was highly active in the community. Her service included supporting the Good Samaritan-Pig Project with her husband, Larry, who helped start the Project by collecting donations from the community in support of this project. She served in the Brown County Fair Association for several years and was an integral part of collecting funds for the premium sale for the Brown County Youth Fair as well as preparing the sales sheets and working in the office. She was a member of the Brown County Sheriff Posse-ettes as Larry rode with the Posse. She was active in establishing the Early Community Fund and collecting funds to pay premiums at the Brown County Youth Fair with this fund. She supported her daughters in all their Youth Fair projects showing sheep and steers making many trips to the Major Stock Shows such as Fort Worth, San Angelo, and Houston. She attended many of her daughters' basketball games and other sporting events and was their loudest fan. And once she had her GRANDchildren, she was their loudest fan at all of their events. She was a member of Grace Lutheran Church in Brownwood and an integral part of the Music Ministry. She was in the choir for many years and served as an organist. She also enjoyed serving other churches with their music ministries in communities such as Priddy, Comanche & Richland Springs over the years. While a member at Grace, she was also involved in LWML and the Church Council most recently as the secretary. Ruth is survived by her two daughters, Shelly Jasek (John) of Waco, Shannon Adams (Donny) of Early and four GRANDchildren, Abigail Jasek, Aaron Jasek, Morgan Adams, and Dalton Adams; her sister, Eunice Evans (Roy) and her son Mark, along with numerous nieces and nephews. Ruth was so very proud of her daughters and their families especially her GRANDchildren as she liked to call them. Ruth is preceded in death by her husband, Larry; her parents; her sister, Edna Eidum and her brother-in-law, Chuck Eidum. A visitation will be held from 5 to 7 p.m. Friday, March 5th at Heartland Funeral & Cremation Service, 303 Early BLVD, Early, TX 76802. Funeral services will be held at 2 p.m. Saturday, March 6th at Zion Lutheran Church, Priddy, TX, with interment to follow at Zion Cemetery. Memorials can be made to Good Samaritan Ministries - The Larry Schwartz Pig Project/Brownwood, the Church or the charity of your choice. Heartland Funeral and Cremation Services is in charge of arrangements.

Nana - Mother - Wife all describe the wonderful woman, Ruth Schwartz that we lost from this earth to be with her one and only love, Larry Schwartz. She passed peacefully in her sleep on Friday, February 26th at home. Ruth Annette Adeline Striepe... View Obituary & Service Information

The family of Ruth Schwartz created this Life Tributes page to make it easy to share your memories.

Send flowers to the Schwartz family.