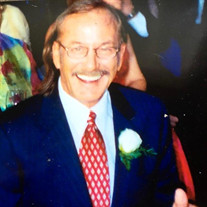 Scott Arnold "Smitty" Smith, died peacefully in his sleep after a brief illness on May 4, 2021. At 71 years old, he died as he lived, on his own terms.Scott was born in Evanston, Illinois on November 14, 1949 to Brayton and Corinne (Tucker) Smith. The family moved to Brownwood, Texas in 1959 where Scott graduated from Brownwood High School in 1968. While in High School, Scott founded the first real Rock ‘N’ Roll band in Brownwood, The Midnight Riders. They had a short but successful run, playing throughout Central Texas, Austin, and Houston. Scott also loved going to the family cabin on Lake Brownwood where he fearlessly worked to become one of the finest water skiers in Central Texas. His smile was infectious, and he knew how to share a good time. In the 1970s Scott worked in the jewelry business, buying and selling Native American turquoise and silver. He then worked on the road crew for Van Wilks’ Band during the “Heart Tour.” In 1972 his greatest achievement (his words) occurred when his son Josh, with then wife DiAnn Day Smith, was born. Among the interests that Scott and Josh would share were the love of music, and soccer. Anyone who knew Scott, will recall that he was instrumental in developing and maintaining the Eagle Soccer Club. Josh and his teammates won 4 State Championships defeating many High School and Select Soccer Teams along the way. Music was a lifelong passion that Scott passed on to Josh; beginning with the drums and moving to guitar. Becoming an excellent guitarist, Josh currently plays with Van Wilks (an original Midnight Rider). The love for music that Scott instilled in Josh has come full circle. Scott lived in Austin area for over 20 years where he worked as a carpenter. He continued to play his guitar, and wrote many songs that unfortunately were never written down and are now lost to us. During his Austin years he became a Grandfather to his 2 grandsons and 1 granddaughter. He enjoyed spending time with them, and reveled in their accomplishments. In 2017 Scott returned to Brownwood to be close to his brother, Jeff, and continue his carpentry work. Many a weekend was spent watching whatever sporting event was in season. As both brothers were partially deaf, there was much hollering and screaming, not to mention some serious beer drinking. Great fishing trips also ensued, with both brothers catching big stringers of bass; releasing the biggest ones for another day. Scott is survived by his son, Josh Smith, and wife Andrea, grandchildren, Parker, Ellie, and Tucker, all of Cedar Park, Tx , brother Jeff Smith and wife Carolyn (Freddie) of Brownwood, TX, sister LeAnne Smith of San Marcos, TX, nieces Erryn DeLeon and husband Mike of Wimberley, Tx, and Ashli Strittmatter and husband Patrick of Frisco, Tx. He is also survived by 1 great nephew and 3 great nieces, as well as cousins Randy, Brad, and Steve Smith, and cousins Kay Richardson and Judy Clem. A Celebration of Life will be held on June 4, 2021, from 3-5pm at Teddy’s Brewhaus, 100 Fisk Ave, Brownwood, 76801. In 2019 Scott was made an Honorary Doctor of Naprapathy, a health profession founded in 1907 by his grandfather, Oakley Smith. In honor of his grandfather, Scott named his son Joshua Oakley. Bequests can be made in Scott’s memory to:Southwest University of Naprapathic Medicine: (SUNM); 2006 Botulph, Suite A; Santa Fe, NM, 87505 Or online: https://sunm-edu.com please designate as “Oakley Smith Research”

Scott Arnold "Smitty" Smith, died peacefully in his sleep after a brief illness on May 4, 2021. At 71 years old, he died as he lived, on his own terms.Scott was born in Evanston, Illinois on November 14, 1949 to Brayton and Corinne (Tucker)... View Obituary & Service Information

The family of Scott Arnold "Smitty" Smith created this Life Tributes page to make it easy to share your memories.

Scott Arnold &quot;Smitty&quot; Smith, died peacefully in his sleep after...