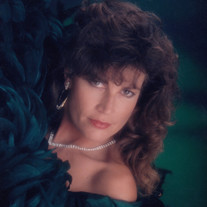 Sherry Jolene (Craddock) French, 61, of Brownwood, Texas passed away Friday, November 19, 2021. A Celebration of Life Service will be held in the Heartland Funeral Home Chapel at 2:00 PM, Saturday, December 4, 2021. Sherry was born May 3, 1960 in Slaton, Texas to Dalton Craddock and Lena Modell Simmons. She attended school in Dublin and Bangs, Texas. Sherry and her siblings use to sing on a Sunday Radio Program in Stephenville, Texas. They travelled to the VA Hospital in Temple and a nursing home in Dublin where they would perform and made such great memories. Sherry was blessed with three children and worked in the community as a manager for restaurants and hotels. Sherry was a passionate woman who liked things the way she liked them, and you could tell this is what made her such a good manager. She was a wiz in the kitchen because she loved to cook. Her favorite was enchiladas but she was often found in the kitchen cooking cookies with grandkids. Sherry loved to tan, if they were on the lake, she was laying out on the boat soaking in the sun rays, in the winter, her children remember sitting and watching tv at the tanning salon while mom tanned. Her house was decorated with all kinds of cowboy and Native American décor, she loved two step dancing while listening to country music and she was an outspoken supporter of Donald Trump. There were three things that she was protective of, her children, her animals and her car although she always said the animals listened and minded better than the other two. Sherry loved to laugh and tell jokes. She would start telling a joke and ended up laughing so hard before she could finish it. Sherry knew the bible and was quick to show you where a passage was written if requested, she loved watching the Christian Broadcast Network and taught all her grandchildren how to pray. Sherry is survived by her sons, Jeremy Northcutt of Bangs, Anthony French and wife Angie of Bangs; daughter, Jolene French of Brownwood; mother, Lena Kinsey of Bangs; father, Dalton Craddock of Dublin; brothers, Danny Craddock and wife Marissa of Bangs, Randy Craddock and wife Lisa of Early and Gary Craddock and fiancé Shelly of Brownwood; sisters, Crystie Lishka and husband Terry of Brownwood, Kathy Davis and husband John of Rising Star, Karen Lyon and boyfriend Doodle of Austin, Melissa Steelman and husband Terry of Merkel and LaJuan Idaho of Austin; 10 grandchildren, Hero, Toot, China Doll, Warrior, Angel, Chief, Boogie Bear, Taylor Tot, Haley and Kiera; along with many nephews, nieces and friends. Sherry was preceded in death by her grandson, Isayah French and brother, Neal Craddock. Online condolences, tributes and memorials can be shared with the family at www.heartlandfuneralhome.net

The family of Sherry J. French created this Life Tributes page to make it easy to share your memories.

Send flowers to the French family.