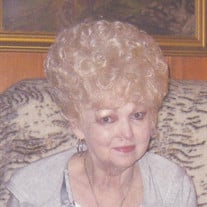 Shirley Fudge, age 80, of Brownwood, passed away, Saturday, April 2, 2022. Funeral services for Shirley will be held at 10:00AM Wednesday, April 6 in the Heartland Funeral Home Chapel. Visitation will be held from 6 to 8PM on April 5 at Heartland Funeral Home. Shirley was born to Iris and Earl Freeman on April 1, 1940 in Brownwood. She obtained her state certified manicure license from Brownwood Beauty College. She married Walter Harris in 1957 in Snyder and they began a life together that blessed them with 3 boys; Jim, Greg, and Ron. That marriage ended in divorce. Later, she married John Fudge in Brownwood. Shirley was saved and baptized in a Baptist Church in Las Cruces, NM when she was 13 years old and she kept her faith through the years. She attended church at First Baptist Brownwood before early health issues developed. Shirley continued to watch TV services from home. While enrolled in New Mexico and Texas schools, she was involved in choirs and music clubs sharing her love of singing Shirley had a deep love for dogs, especially poodles, and at one time, she had three. They were spoiled rotten She loved candy and sugar all of her life. She had been known to put 30 packets if sugar in a tall glass of iced tea. When asked if she got it sweet enough, she replied, "it's almost there." She was blessed by getting to travel and see most of the USA and other parts of the world: Mexico, Jamaica, Egypt, and the Holy Lands. Most of all, her favorite thing to do was spend time with her three boys and grandchildren. Their occasional trips to the Texas Gulf Coast were the highlight of her year. This kind, loving, sweet person that she was will be missed by her family and friends. Their memories of her will be lasting and bittersweet. Shirley is survived by her husband, John Fudge of Brownwood; sons, Greg Harris, and Ron Harris, both of Waco; sister, Judy Baker and husband Joe of Stillwater OK; brother, Mike Bennett and wife Judy of Nacogdoches. She is also survived by 10 grandchildren, 3 great grandchildren, a host of other relatives and many friends. She was preceded in death by her parents, and son, Jim Harris. On behalf of Shirley and her family, we wish to give a heartfelt "Thank you" to the staff of Solaris Hospice, and Pecan Bayou Nursing Home who were all so carring and supportive during our time of need. In lieu of flowers, the family requests that donation be made to Corinne T. Smith Animal Center in Brownwood in Shirley's name (www.ctsanimalctr.org).

Shirley Fudge, age 80, of Brownwood, passed away, Saturday, April 2, 2022. Funeral services for Shirley will be held at 10:00AM Wednesday, April 6 in the Heartland Funeral Home Chapel. Visitation will be held from 6 to 8PM on April 5 at Heartland... View Obituary & Service Information

The family of Shirley Joan Fudge created this Life Tributes page to make it easy to share your memories.

Send flowers to the Fudge family.