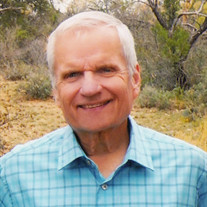 Funeral services for Stephen Dansby, age 71, of Brookesmith, will be held at 10:00 AM, Saturday, April 30, 2022, in the Heartland Funeral Home Chapel. Burial will follow in the Winchell Cemetery. The family will receive friends at the funeral home on Friday evening from 6:00 until 8:00. Stephen passed from this life on Monday, April 25, 2022, in a Dallas hospital. Stephen Charles Dansby was born on June 11, 1950, in Chicago, Illinois to Dr. Garland and Maebell (Fitzgerald) Dansby. He was raised in Llano and graduated from Llano High School in 1968. He married Linda Garmon on June 26, 1971, in Sonora, Texas. Stephen earned a Bachelor of Science degree in Wildlife Management from Texas Tech University and his MBA from the University of North Dakota. He served his country in the U.S. Air Force as a Missile Launch Officer for 155 missions under North Dakota. He served for eight years, attaining the rank of Captain. Stephen worked as a construction superintendent before starting a 30 year career with the United States Postal Service, first as a clerk and later as the Postmaster for San Saba. Stephen was a lifelong learner of all things, writer, pilot, builder, drawer, hunter, painter, a Texas Tech fan and lover of all things grandchild related. Stephen is survived by his wife Linda, of Brookesmith, a daughter, Danielle Howard and husband Cory of Brookesmith, and a son Derek Dansby and wife Brandi; four grandchildren, Parker Howard, Aidan Howard, Collins Dansby and Cash Dansby; an aunt, Earleene Fitzgerald of Brookesmith and a cousin, Paula Patterson and husband Hoke Gracely of Houston and many nieces and nephews. He was preceded in death by his parents, an infant daughter, Katherine Dansby, and a sister, Carol Rogers. The family requests that memorials be made in Stephen's memory to the Brownwood Public Library, 600 Carnegie, Brownwood, 76801.

Funeral services for Stephen Dansby, age 71, of Brookesmith, will be held at 10:00 AM, Saturday, April 30, 2022, in the Heartland Funeral Home Chapel. Burial will follow in the Winchell Cemetery. The family will receive friends at the funeral... View Obituary & Service Information

The family of Stephen Dansby created this Life Tributes page to make it easy to share your memories.

Send flowers to the Dansby family.