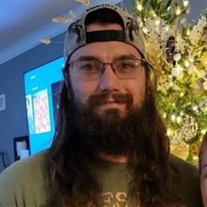 Our beloved Terrylee "Bud" Dawayne Oliver gained his heavenly Harley wings on March 6, 2022. Funeral Services for Terry Lee will be held on Saturday, March 12 at 10AM in the Heartland Funeral Home Chapel. Visitation will be held from 6-8PM on Friday, March 11, at Heartland Funeral Home. Terrylee Came into this world fighting and kicking on May 24, 1994. He was born in Brownwood, Texas to Jolana and Terry Oliver. He was our son, brother, and best friend. He was a "big" little brother to two sisters that were wild about him and loved him fiercely. Terrylee was the man to call for a good time, in times of trouble, or whenever you needed a friend to talk to. Whenever he walked into any room his long-legged stature, and his loud smart aleck tone instantly made his presence known. He was a screwball, but he was our partner in crime, protector, and moving buddy. Terrylee loved hard and big. He forgave quickly and could make friends with anyone. If he knew you, he loved you with his entire heart. Terrylee married the woman that was made just for him, Elizabeth Ashlee on July 10, 2020. They were young and in love and spent every minute they had together enjoying life. Together they created a welcoming home for family, friends, and dogs like Sammy. Terrylee spent his working hours as a line clearance specialist foreman for Wrights Tree Trimming Service. On the weekends he wasn't spending time with family and friends, he was traveling with his mentors James and Marion Jones, working hard and enjoying life on the road. As a child, Terrylee gave his heart to the lord. He attended New Beginnings Church where he looked up to Steve Mays and Kelly Crenshaw in all matters of his faith. He attended both Zephyr and Goldthwaite High Schools where he gained his life-long friends Jose, Ryan Martin, Son, and Chris. Later in life, he connected to Ryan Stewart, Trey, and John Paul. Terrylee spent time with his family every chance he had. He would often spend time with his nieces and nephews, having water balloon fights and Nerf gun wars. He knew how to love people on many different levels. He was their biggest supporter and secret keeper. He was the uncle that every child needs. He loved and supported his family in every way he could. One of Terrylee's favorite hobbies was riding his motorcycle. He was able to bond with his grandpa Jim Oliver through this love of bikes. He loved going for rides with his dad and best-friend Terry. His love for riding led him to the Gypsy MC, where he enjoyed being a member and riding with his brothers. The loss of Terrylee will forever be felt as we attempt to navigate through life without him. His blue eyes could take away any pain. He loved all of us. When he was around there was nothing to fear and everything was right in our world. Terrylee is survived by his wife, Elizabeth Ashlee Swenson-Oliver; parents, Jolana and Terry Oliver; sisters, Amanda Gowin and husband Justin, Janakay Ray and husband Trevor; grandparents, Wanda and Jim Oliver, Brenda Massey, Dorene and Bob Swenson; father and mother in law, Robert and Becky Swenson; brother and sister in law, Derrick and Jenny Bobo; sister in laws, Tanya Swenson and Kyla Swenson; nephews, John Paul, Elliot, Eathan, John Thomas, Jetson, Josiah, and Everett; nieces, Elissa, Hannah, Trinity, and Faith. He is also survived by many aunts, uncles, cousins, extended family, and a host of friends. He was preceded in death by his grandparents, Alma and Elbert Sledge, and Ernest D. Massey; and uncle, Randy Sledge.

Our beloved Terrylee "Bud" Dawayne Oliver gained his heavenly Harley wings on March 6, 2022. Funeral Services for Terry Lee will be held on Saturday, March 12 at 10AM in the Heartland Funeral Home Chapel. Visitation will be held from 6-8PM on... View Obituary & Service Information

The family of Terrylee Dawayne Oliver created this Life Tributes page to make it easy to share your memories.

Send flowers to the Oliver family.