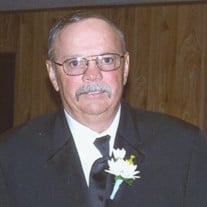 Tommy “Cricket” Lee Mann, departed this life Wednesday December 30, 2020. Tommy Lee Mann 1st Sgt “Cricket” was born July 18, 1949, in Crane, TX, to Tommie and Mildred (Jacobs) Mann. After high school, Tommy enlisted in the United States Army where he served 3 tours in Vietnam, served at bases in Fort Sill, Oklahoma; Heilbronn, Germany; and then he was 1st Sgt of the Field Artillery Unit when the Berlin Wall fell in 1989. He retired from the military after 20 years of faithful service in 1991. Tommy married Peggy Joyce King December 16, 1978, in Brownwood, TX. He received an Associate degree in Computer Networking from TSTC in 1998. He had other jobs including working at Texas Youth Commision, and GTech Corporation. He retired in 2009 to pursue his dream of being a farmer. He and Peggy moved to the country in Blanket in 1999 and then to Comanche County in 2015. He enjoyed farming and ranching, raising their children, keeping the grandbabies, and spending time outdoors. Tommy really liked working and raising his Wagu bred cows. He loved the times he spent with family and friends, he always had a good story and loved to joke around and laugh with everyone. He was very proud to be called Soldier, Husband, Dad and PawPaw to his grandchildren. Tommy is survived by his wife of 42 years, Peggy; daughters, Kimberly Tidwell and husband Dillon of Brownwood, and Katie Mann of Zephyr; grandchildren, Emma, Kylon, and Oliver Tidwell; brothers and sister, Horace Mann of Brownwood, TX; Barbara Gentry of Santa Fe, TX; and Tony Mann of Little Elm, TX; numerous cousins, nieces, and nephews. He was preceded in death by his parents and brother Butch Mann.

The family of Tommy Lee Mann created this Life Tributes page to make it easy to share your memories.

Send flowers to the Mann family.