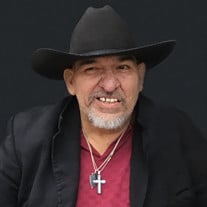 On Saturday, August 22, 2020, Victor David Henry was taken up to heaven, to be with His Savior, Jesus Christ. A Celebration of Life Service will be held from 3:00 - 5:00 PM, Thursday, August 27, 2020 in the Heartland Funeral Home Chapel. Victor was born on July 5, 1965 in Willmar, Minnesota. Victor grew up in San Saba, Texas and was a graduate of the class of 1984 of San Saba High School. He later made his home in Brownwood, Texas. Victor was a man of many gifts and talents, which he used to bless the lives of those around him. He was especially known for his dancing and love of Michael Jackson; he even had his own legendary white glove. Victor had the ability to walk into any room and bring laughter and smiles. He enjoyed spending his weekends entertaining the locals with his lively personality and dance moves. An artist in every sense of the word, Victor drew thousands of pictures, wrote hundreds of poems and songs, and even recorded a full-length album once. He never held on to his talent, but gave it freely for others to enjoy. Everyone who knew Victor, knew he was a man of style and loved to dress classy. You could often spot him walking in town, or sitting on a bench near the store in his silky blue or red shirt. He would have his rings on and a hat, both of which he had a large collection. Victor was also a huge Dallas Cowboys fan, and lover of sports in general. He particularly loved to play softball, and did so for many years. He was also one of the biggest San Saba Armadillo fans, where he ran the chains for the football games for numerous seasons. Victor’s faith in Jesus Christ was the most important thing to him. This was reflected in his art and writings, and in his testimonies. Second was his family. He loved to spend time with his family, and would care for his nieces and nephews as if they were his own children. Victor lived his life to the fullest. He gave much, laughed much, and loved much. His smile and iconic laugh will never be forgotten. Victor will be forever remembered and dearly missed by his brother, John Henry and wife Jennifer; brother Robert Henry and wife Trisha; brother Gabriel Henry and wife Chantee; sisters Lupe Henry, Barbie Yelvington, Debie Sales; his nephews and nieces, Juan Torres and wife Erica, Alicia Torres, Tara Longoria and husband Jordan, John Henry and wife Madi, Joseph Henry and wife Demi, Samantha Henry, Victoria Henry, Anthony Henry, Noah Henry, Brandon Henry, Colby Henry, Madison Henry, Aleah Henry, Lucas Villesca and numerous cousins. Victor was preceded in death by his loving mother, Florence Huerta; father, John Henry; brothers BJ Yelvington, Kenny Yelvington; sister, Jo Ann Campuzano, and baby brother Michael Henry. The family wishes to send a special thank you to the staff at the Brownwood Nursing and Rehab for their care and compassion. Online condolences can be made to the family at www.heartlandfuneralhome.net

On Saturday, August 22, 2020, Victor David Henry was taken up to heaven, to be with His Savior, Jesus Christ. A Celebration of Life Service will be held from 3:00 - 5:00 PM, Thursday, August 27, 2020 in the Heartland Funeral Home Chapel. Victor... View Obituary & Service Information

The family of Victor Henry created this Life Tributes page to make it easy to share your memories.

Send flowers to the Henry family.