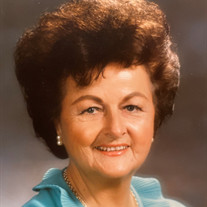 Virginia Alice Nunnelee-Warren went to be with her Lord and Savior on Monday, December 6, 2021. She died quietly in her home with her beloved puppies, Happy and DeeDee, and her family. Services will be December 9, 2021, at Heartland Funeral Home beginning at 2:00 P.M., with graveside to follow. Visitation will be on December 8, 2021, from 6:00 P.M. to 8:00 P.M. Virginia was born on March 13, 1927 in Thrifty Texas. She graduated from Bangs High School and later graduated from Brownwood Beauty School. After graduation she worked at the Camp Bowie Army Base in Brownwood Texas. Virginia married Bradford Nunnelee in Brownwood Texas on December 27, 1942, until his death on March 5, 1988. She later remarried to Johnny Walter Warren in Las Vegas, Nevada on April 14, 1990, and they were married 28 years. Virginia and Bradford had four children. Richard Austin Nunnelee, spouse Ramina of Newbury Park, California, Susan Ann Bullion-Junek, spouse Calvin of Olney, Texas, Larry Lynn Nunnelee, of Early Texas and Patricia Lane Ferreiro, spouse Jackie Andersen of Brownwood, Texas. During Virginia's career she worked for the Port Hueneme Naval Base in Port Hueneme California. She was the supervisor of the Drafting department for the Navy catalog. Her department was responsible to create the ordering catalog for the United States Navy. Mom said, "Once it left my desk it went straight to New York for print." She loved her work, and she loved her family. She always had an open door for family, friends and guests. Her motto was, "The more the merrier!" Virginia was a master Bridge player, and she enjoyed playing with her friends at the Brownwood Country Club, for many years. She was a member of the Daughters of the American Revolution. She was a member of the Toastmistress Club in California, where she held the title of President. She often gave inspirational speeches on empowerment and living a joyful life. Virginia was a member of the Garden Club in Brownwood, and she won many awards for her arrangements. Virginia loved to grow flowers and was an avid gardener. She canned the vegetables she grew, so she could share them with her family. Another love of Virginia's was making candy, and she was so happy to see that her grandchildren enjoyed making it with her. She always wanted to pass down the joy she found in her life to the ones she loved the most, her family. Virginia, at age 92, wrote her first book titled, "It Can Happen to You, Even at 92". Then at age 94, she wrote her second book titled, "There's Even More at 94." Virginia wanted to leave her family with a reminder that their roots are strong, and bound by a love that will hold them together through time. Virginia is survived by her children, Richard Austin Nunnelee, Susan Ann Bullion-Junek, Larry Lynn Nunnelee, and Patricia Lane Ferreiro; grandchildren, Michael Lynn Graves and wife Marlene of Clearwater, Florida, Aaron Brandon Graves of Olney, Texas, Lisa Lynn Nunnelee of Early Texas, Christy Christian and husband John of Austin, Texas, Tyler Ross Nunnelee and wife Ann Marie, Ryan Philip Ferreiro and wife Melissa Irene Ferreiro of FT Worth, Texas, Chantal Dodson of Ojai, California, Natalie Watre of Simi Valley, California; 23 great grandchildren and 5 great great grandchildren. Virginia is preceded in death by her spouses, Bradford Nunnelee, Johnny Walter Warren; parents, Leona Cunningham-Baker and Eddie Cunningham; sister Frances Warren; son Bill Evans; grandson, Shawn Augustine Ferreiro and Kevin Lane Ferreiro.

Virginia Alice Nunnelee-Warren went to be with her Lord and Savior on Monday, December 6, 2021. She died quietly in her home with her beloved puppies, Happy and DeeDee, and her family. Services will be December 9, 2021, at Heartland Funeral... View Obituary & Service Information

The family of Virginia Alice Nunnelee-Warren created this Life Tributes page to make it easy to share your memories.

Virginia Alice Nunnelee-Warren went to be with her Lord and Savior...

Send flowers to the Nunnelee-Warren family.