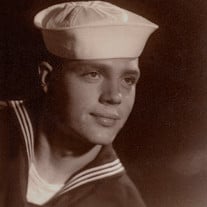 W. H. Gorman, 91, of Brownwood passed away Wednesday, December 2, 2020. A graveside service will be at 2:00 PM, Friday, December 11, 2020 in the Texas State Veterans Cemetery, 7457 W Lake Rd, Abilene, TX 79601 officiated by Richard Hetzel. W. H. Gorman was born October 25, 1929 in Childress, Texas to William Henry and Wilma Jessie Gorman. W.H. attended Brownfield High School and joined the US Navy. He served during the Korean War on the Heavy cruiser, USS St. Paul as a signalman and landing parties where he directed naval gunfire. He returned to the states and a short time later married Nelda Joyce Gipson on February 6th, 1953, creating a union that would last over 67 years and bless them with 3 children. W. H. served as a scoutmaster for Troop 268 Boy Scouts in Plainview, Texas for several years. He was a supporter of the Plainview High School Band parents Carnival. He worked for the U.S. Postal Service and retired after many years of service. He was an avid fisherman and loved to catch anything that would bite a hook. He loved spending time with his kids and grandkids whom he also turned into fisherman. He spent a lot of time hunting in the mountains of Colorado with his son, Kenneth and was no stranger to packing in by horseback and spending several days per trip in primitive camps. W. H. and Nelda traveled extensively with their RV which drove their children crazy as they did not check in regularly. They traveled across all of the lower 48 states and often wintered in the Rio Grande Valley. Family was very important to him and making memories with his family was his favorite thing to do. W.H. is survived by his beloved wife, Nelda Gorman of Brownwood; son, Kenneth Gorman and wife Kathie of Cortez, Colorado; daughters, Karen Crow and husband Terry of Redding, CA & Kathryn Keeter and husband Mark of Bastrop; grandson Bradley Harvey of Kerrville; granddaughters, Erin Hutchinson and husband Ben of Reno, NV, Lisa Crow & Michael Hulsey of Redding, CA, Samantha Dean and husband Taylor of New Braunfels; an unofficially adopted grandchild, Andrew Sam; 8 great grandchildren and many nieces, nephews and friends. W.H. was preceded in death by his parents; sisters, Patsy June Essary, Lawanda Patton, Joyce Juanell Townsley.In lieu of flowers the family has requested donations be made to USS Saint Paul Association – c/o Dennis McFadden, PO Box 353, Petal, MS 39465. Online condolences, tributes and memorials can be shared with the family at www.heartlandfuneralhome.net

The family of W. H. Gorman created this Life Tributes page to make it easy to share your memories.

Send flowers to the Gorman family.