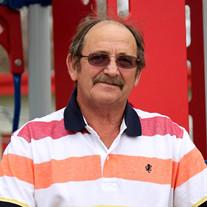 Walter Fred Bardwell April 21, 1955 – February 15, 2021. Walter Fred Bardwell, 65 of Brownwood, gained his angel wings on February 15, 2021. Walter was born on April 21, 1955 in Waco Texas. Walter was the first child born to Herman Wallace Bardwell & Edna Mae (Weatherford) Banks. Walter was Bubba to six sibling whom he helped take care of and loved doing it.   He grew up, moving from Texas to California back to Texas where he attend schools. He went to University High School in Waco Texas. In 1975, Walter met the love of his life Linda Jean Fikes and they married. During their 34 years of marriage, they had two sons.  Walter worked in the oil fields of Texas for many years, then he started work at Lyrick’s Roofing and was there for many years, in recent years Walter enjoyed working at Greenleaf Cemetery on the ground crew. Walter loved to be outside whether it was mowing a yard or fishing on a river bank.  Walter was an avid bowler for over 20 years.  Walter loved the Brownwood Lions football and rarely missed a football game. He was a diehard Dallas Cowboys fan. Just know when the Cowboys are playing in the AT&T stadium, he will be cheering them on from above. Tommy Joe and Walter were best Buds sense the day Tommy Joe was born. Tommy and Walter always had their Friday nights where they watched wrestling and would have a fish fry. Where no one else was invited.   He loved his family with his whole heart and would do anything to help his family. Walter was an amazing son, brother, husband, father, grandfather and Uncle.  He was so proud of his two son and how far those young men have come in life.      Walter will be missed everyday by his family, Fur baby Yogie and his friends. Walter is survived by his loving parent, Charles Banks of Brownwood, Sons; Walter David Bardwell and Pam Sears of Hurst, Tx, Shannon Bardwell and wife Stephanie of Kingsville, Tx. Granddaughter Kayleigh Bardwell, Skyler Bardwell, Grandsons Tyler Bardwell, Shane Bardwell. Sisters; Cheryl Franks and husband Rex of Brownwood, Dianne Graham and husband Charlie of Glendale, TX, Jeannette Buris and husband Tim of Brownwood, Jackie Carmack of Granbury, TX. Darla Chriswell and husband Doug of TN.  Nancy Bardwell of Blytheville, Arkansas Step sibling, Nelda Pott and husband Allen of Brownwood, TX, Andrea Thompson and husband Mike of Burleson, TX, Melissa Carroll and husband Richard of Azle, TX, and Chuck Banks and wife Brandy of Cleburne, TX, and close friend Travis Ashburn of Lake Brownwood. Many Aunts, Uncle, nieces, nephews, great niece and nephews. And his partner, who was always beside Walter, Yogie his Fur Baby.     Walter was preceded in death by his loving wife, Linda Jean Fikes, Mother Edna Mae Banks, father Herman Wallace Bardwell, Brothers Jody Bardwell, Tommy Joe Bardwell, Robert Earl Bardwell, Wallace Glenn Bardwell and Randy Dale Bardwell, Grandparents, Leona Harper, Hershel Fred Weatherford, William G. Bardwell Sr., Effie Carlisle and a nephew Cory Buris.

The family of Walter Fred Bardwell created this Life Tributes page to make it easy to share your memories.

Send flowers to the Bardwell family.