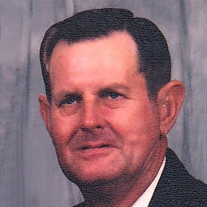 Walter “Dink” Durwood Hill, 79, of Early & Rising Star, Texas passed away Saturday, December 12, 2020. A visitation will be held from 6:00 to 8:00 PM at Heartland Funeral Home on Monday, December 14, 2020. A funeral service will begin at 2:00 PM Tuesday, December 15, 2020 in the Heartland Funeral Home Chapel with interment to follow at Rising Star cemetery, officiated by Terry Simmons. Dink was born March 10, 1941 to Charlie and Bertha Mae Hill and was raised by his Beloved Mamie, Maud Richardson Hill in Rising Star after the passing of his father. He graduated from Rising Star High School. He married the love of his life, Judy Burress Ford on January 1, 1988 in Brownwood. Dink was an avid train enthusiast. He enjoyed riding trains and collecting model trains. He loved his dachshunds, and one of his latest four-legged companions passed only two days ahead of him. His greatest love, however, was his love for his family. He enjoyed attending events in which his grandchildren participated. Dink enjoyed travel and would often find someone he knew, no matter where he traveled. He considered many people as family with whom he shared no DNA, but he loved them just the same. He was a strong supporter of local first responders and extremely proud of the career path of his children, grandchildren, and son-in-law who have served in the military and/or served as first responders. He was a member of the First Baptist church of Early and a Mason for many years. Dink is survived by his daughter, Toni Hill McMillan and husband Wayne of Early; sons, Kerry Hill and wife Maxine of Weatherford, Chad Hill and wife Carla of Early; former son-in-law Duane Becktold and wife Augustine of Blanket; grandchildren, Austin Hill of Watauga, Kinzey Funderkurk of Early, Garret Hill of Watauga, Dustin Becktold of Brownwood, Chase McMillan of Albuquerque, NM, Ryan Hill of Early, Rylie Hill of Early, Sidney Becktold o Early, Kaiden Hill of Weatherford; great grandchildren, McKinley Belle of Early, Ezra & Piper of Early; sisters, Karen Dickson and husband John of Milam, Kathy Fagan and husband Michael of Lake Brownwood; as well as many nieces, nephews and friends. Dink was preceded in death by his beloved wife, Judy Burress Hill; his mother, Bertha Dunlap and father, Charlie Hill. Online condolences, tributes and memorials can be shared with the family at www.heartlandfuneralhome.net

The family of Walter "Dink" Durwood Hill created this Life Tributes page to make it easy to share your memories.

Send flowers to the Hill family.