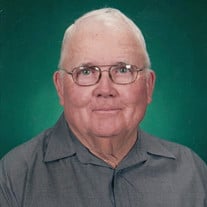 Wayne Pittman, 86 of May passed away Wednesday, February 2, 2022. Visitation with family will be held at Heartland Funeral Home, Sunday, February 6, 2022 from 3:00 - 5:00 PM. Chapel service at Heartland Funeral Home will begin at 2:00 PM, Monday, February 7, 2022 with interment to follow at Pleasant Valley Cemetery in May, Texas with David Williams officiating. Wayne was born to R.V. and Alene Pittman on October 11, 1935 in Owens, TX. He married Lomah Pittman (Cobb) on June 3, 1955. Shortly after marrying, they moved to Kermit, TX where he was employed by Lawson Lumber Co. and later became the manager of their Ready-Mix Concrete division. In 1963, the couple returned to Brownwood where he worked in sales for various plumbing and hardware businesses. In 1975, they moved to May where he and Lomah began ranching and farming. Together they raised three children and enjoyed more than 64 years of marriage. Wayne was involved in the community in many ways. He served as a member of the May ISD Board of Trustees for seventeen years and was on the board of directors of the Brown County Fair Association and the chair of the Rodeo Steering Committee. He watched countless sporting events involving their children and grandchildren. Wayne was a member of First Baptist Church of May. Wayne was dearly loved by his family. He is survived by his son Thayne Pittman and wife Linda and grandchildren Ethan and Baylie of Gladewater, TX; son Glenn Pittman and wife Jennifer and grandchildren Callie and Clay of Itasca, TX; daughter Karen Saucillo and husband Ramiro of Owens and her children Rebecca Esparza and her husband TJ of Kermit and great-granddaughter Jadalynn Jo Esparza and Joshua McFarland and wife Tercei of Temple, TX. Wayne is also survived by his brother Randy Pittman and wife Meichelle of Blanket and brother Rick Pittman of Owens. He is also survived by an aunt, Billie Thomas of Brownwood and numerous nieces, nephews and cousins. Wayne is preceded in death by his parents, his wife, his brother Jerry Pittman and wife Roseanne, and a grandson, Justin Cody Pittman. The family would like to extend a special thank you to the staff and caregivers of Songbird Lodge secure unit in Brownwood and Solaris Hospice. In lieu of flowers the family has requested that memorials be made to the First Baptist Church of May, Brown County Fair Association, or the charity of your choice. Online condolences, tributes and memorials can be shared with the family at www.heartlandfuneralhome.net

The family of Wayne Pittman created this Life Tributes page to make it easy to share your memories.

Send flowers to the Pittman family.