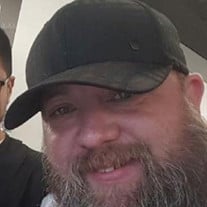 Wesley Grant Goodson, 49, of Lorton, VA, passed away at his home Friday, June 12, 2020. A memorial service, entrusted to Heartland Funeral & Cremation Services Comanche, will be held at the funeral home 2:00 p.m. Saturday, June 27, 2020. Condolences to the family can be left online, sign it at www.heartlandfuneralhome.net or come by Heartland to sign the register. Wes was born July 5, 1970, in Austin, TX, to David Herbert and Ruth (Robertson) Goodson. He attended cosmetology school In Waco, TX and was self-employed as a Cosmetologist specializing in men’s cuts for 26 years. As a small child, Wes enjoyed hunting with his father and fishing with his grandparents. He loved camping and being outdoors, deer hunting was his fondest memory. From his early years, music became an important part of Wes’ life and continued to present where he was able to attend live concerts. He had a love of watching sporting events both on TV and in person, baseball became his favorite spectator sport. Wes had the biggest heart, most contagious laugh and loved his son, family, and friends with his whole heart, which manifested itself in a thriving business and a multitude of friends. While cutting hair, he provided his own unique form of entertainment and his own brand of wisdom. Wes was a Baptist and had an extraordinarily strong religious belief, especially in his later years, and shared it readily at every opportunity. Wes is survived by son, Grant Herbert Goodson, student at Texas A&M in College Station, TX; mother, Ruth Goodson; sister, Tracey Carr and husband Stacy, Makenna, Harper, and Garner. He is also survived by his loved step children Erica Cameron, Ashley Canet, Emma Happney, and 4 grandchildren. He was preceded in death by his father, David Herbert Goodson; maternal grandparents, Virginia Robertson-Wood and Houston (Bally) Robertson; paternal grandparents, Herbert and Mary Goodson. In lieu of flowers, contributions can be made to the Youth Fund of First Baptist Church Comanche, 407 N Houston, Comanche, TX 76442 or charity of donor’s choice.

The family of Wesley Grant Goodson created this Life Tributes page to make it easy to share your memories.

Wesley Grant Goodson, 49, of Lorton, VA, passed away at his home...

Send flowers to the Goodson family.