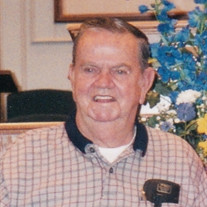 Bill was born on June 12, 1932 in his family home in Giles County, Virginia to Joseph and Annie (Harold) Brown. He graduated in 1950 from Pembrook High School. He was awarded an Academic Scholarship to the University of Lynchburg Virginia. After spending 10 days at college, he decided he was homesick and returned home. After a short while at home, he decided to join the United States Air Force. He proudly served his county for 30 years. Bill was stationed at Johnston Island (Hawaii), Goodfellow (San Angelo), Dyess (Abilene), Aviano (Italy), Webb (Big Spring), Clark (Phillipines), Bitburg (Germany), Randolph (San Antonio), Saigon (Vietnam), Elligton (Houston), Ramstein (Germany), and Sheppard (Wichita Falls). Bill was an air traffic controller, and while at Ellington Air Force Base, he worked with the Astronauts at Johnson Space Center. He retired in 1980. While based at Goodfellow in San Angelo, he met the love of his life, Wanda Mae. They married on February 19, 1955 in Carlsbad, New Mexico. They were married 58 years at the time of Wanda's passing. After retiring, he used his GI Bill to attend Midwestern State University in Wichita Falls, Texas. He is survived by his son, Lonnie J. Brown of Brownwood; stepson, Gary G Henderson and wife Heidi of Port Aransas, step daughter, Charisse Fitzgerald and husband Kirk of Brownwood; grandsons, Jason Henderson of Lockhart, and Mickel Perkins of Brownwood; granddaughters, Kollyn McWhinney of Lovelady, Kimberly Fisher, Angela Brown, and Jessica Ray, all of San Antonio, and Mickay Welch of Dripping Springs; 17 great grandchildren, and a great great grandson due in July He is also survived by his brother, Bobby Brown and wife Jospehine of Virginia. He is preceded in death by his wife; parents; daughter, LaDonna Candius Brown; son, Timothy Wayne Brown, sisters, Mickey, Ruth, Elenor, Sharon, and Joan; and brothers, Wade, Wells, James, and Reginald. CMSGT (Retired) William Joseph "Bill" Brown, age 89, passed away peacefully on Tuesday, April 19, 2022. In lieu of flowers, the family requests that donations be made to Interim Hospice.

Bill was born on June 12, 1932 in his family home in Giles County, Virginia to Joseph and Annie (Harold) Brown. He graduated in 1950 from Pembrook High School. He was awarded an Academic Scholarship to the University of Lynchburg Virginia. After... View Obituary & Service Information

The family of Bill Brown created this Life Tributes page to make it easy to share your memories.

Send flowers to the Brown family.