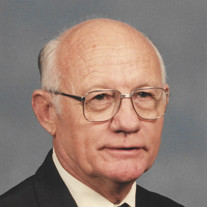 William Ray Jones of Blanket passed away June 21, 2020, at 91 years of age. The graveside services are set for 2 PM Saturday, June 27 at the Moro Cemetery near Blanket. Bill Jones was born August 24, 1928 near Veribest in Tom Green County, Texas. He graduated from Blanket High School in 1944. Bill married Paula Carruth of Blanket January 18, 1950 in Brownwood and had 4 children. Bill Jones began his working career in the oilfield as a pipe fitter, and in the early 50s was a parts man at Taylor Motor Company in Coleman, before moving to Abilene in 1960, and to Midland in 1970. It was in Midland he turned his cabinet making hobby into a full-time job, and eventually became the maintenance man for the Golf Course Road Church of Christ for many years before retiring back to Blanket in 1995. Later, he became an Elder in the Early Church of Christ. Bill is survived by his brother Leon Jones of Abilene; sister Juanita McIlhaney of Kingsland, Texas; four children: Jesse Jones of Blanket, Louise Moss of Houston, John Jones of Arizona, and Carla Sheath of Germany; nine grandchildren: David, Heidi, Robert, Jenny, Rachel, John-Austin, Sarah, Katya, and Sebastian; 12 great grandchildren include Holly, Lilly, Anthony, Danielle, Libney, Reuben, Emma, Kobe, Sam, Kaitlynn, John-William, and Kaida; and a sister, Leona. Bill Jones was preceded in death by his wife of 61 years, Paula Jones; Parents, Adam W. and Agnes Jones of Blanket; brother, John (Jack) Jones; twin-sister, Annie Mae; sister, Leona; and a granddaughter. In lieu of flowers, you may make a donation to your favorite charity or to the Early Church of Christ. Funeral services are under the direction of Heartland Funeral Home in Early.

William Ray Jones of Blanket passed away June 21, 2020, at 91 years of age. The graveside services are set for 2 PM Saturday, June 27 at the Moro Cemetery near Blanket. Bill Jones was born August 24, 1928 near Veribest in Tom Green County,... View Obituary & Service Information

The family of William Ray Jones created this Life Tributes page to make it easy to share your memories.

Send flowers to the Jones family.