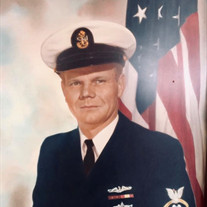 William Tolbert "Bill" Koen passed away on Sunday, May 9, 2021 in Brownwood, Texas. He was born on October 2, 1937, in Pampa, Texas to William Clayburn and Mary Ada (Hardcastle) Koen. With the exception of five years living in Caradan, Texas, he grew up in Pampa and lived there until joining the Navy. Bill married Elaine C. Sebastian on December 23, 1969. She was the love of his life and they remained together in their adventures until her passing in 2011. Bill was preceded in death by his wife Elaine, his parents W.C. and Mary Koen and nephew Kevin Ray Koen. Survivors include his brother Ray Koen and wife Ginger of Goldthwaite, Texas, his nephew Kyle Jason Koen of Goldthwaite, Texas, niece-in-law Rachel Barnes Koen of Houston, Texas, two step-daughters Denise Higgins of Port Charlotte, Florida and Cheryl Allen of Tirana, Albania, and three great nephews Cameron Ray Koen of Houston, Jefferson Raymond Koen and Jackson William Koen of Goldthwaite. He is also survived by very special friends Butch and Wanda Stump and their children of Woodbridge, VA. Bill proudly served for 22 years in the U.S. Navy Submarine Service. He served on numerous diesel and nuclear submarines, as well as several special projects including the Glomar Explorer (Project Azorian), Deep Submergence Vehicles DSR-1 (Mystic) and NR-1. He was an instructor at the Submarine School in New London, Connecticut and a graduate of the Navy Underwater Swimmers School. Upon retirement from the Navy, as a Master Chief Petty Officer, he worked at the Millstone Nuclear Plant for 10 years as a QC/QA Inspector and as an Instructor in their Nuclear Training Department. Bill and Elaine loved traveling in their RV and accomplished their goal of spending at least one month in each of the lower 48 states. They were very active in the Village at River Walk Community in North Port, Florida where they lived. Bill was a member of the Mason Lodge for 51 years. Bill was cremated under the direction of Heartland Funeral and Cremation Service and services will be held at a later date. Memorials can be made to the charity of your choice or to the Caradan Cemetery Association (Betty Horton-Treasurer, P.O. Box 386, Goldthwaite, Texas 76844).

William Tolbert "Bill" Koen passed away on Sunday, May 9, 2021 in Brownwood, Texas. He was born on October 2, 1937, in Pampa, Texas to William Clayburn and Mary Ada (Hardcastle) Koen. With the exception of five years living in Caradan, Texas,... View Obituary & Service Information

The family of Bill Koen created this Life Tributes page to make it easy to share your memories.

Send flowers to the Koen family.