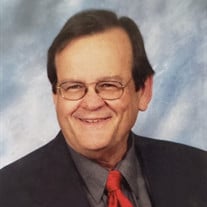 William “Bill” Earl Owen, Sr., 80, of Brownwood, passed away Thursday, October 29, 2020. Bill was born January 1, 1940, in Fort Worth to Joseph and Nora Owen. He attended Texas A&M and married Dorothy Sue Schwarz on August 22, 1959. Together, they found in each other their dreams, drives, hopes, and ambitions. This energy they discovered fueled what would become the assistance to help others in their community, Brownwood. Bill was able to provide much supported financial assistance and guidance to those in the community with his bookkeeping and financial investment training and certification along with his wife’s H&R Block franchise. Bill is survived by his son, William “Billy” Earl Owen Jr. and wife, Gina of Houston; daughter, Amelia “Amy” Owen of Kyle; granddaughters, Brooke Smith of Zephyr, Carly Owen of Houston, and Cami Owen of Houston; grandsons, Brock Owen of Houston, Blake Owen of Houston, Owen “Denny” Johnson of Brownwood; great grandchildren, Bishop Norman, Jerrika Smith, Kalijah and Nae’J Payne; brother, James Owen and wife Gerry; and several nieces, nephews and friends. His parents, Joseph and Nora Owen; brothers, Gene and Howard Owen; brother-in-law Rudy Schwarz and daughter Sharon Owen Johnson, along with so many beloved pets, friends and loved ones have welcomed him to Heaven. We know he will be there to welcome us with his sweet smile and beautiful eyes. In lieu of flowers the family requests that donations be made to the American Heart Association and Brown County ASPCA.

The family of William Earl Owen created this Life Tributes page to make it easy to share your memories.

Send flowers to the Owen family.